“OSCAR” is no longer a big dream now; movie “Aickarakkonathe Bhishaguaranmaar” proves it.

Its really astonishing that a country which makes around 1800 movies every year, which is almost half of the total movies made around the world fail so miserably in the Oscar race. So far, a few movies Slumdog Millionaire, Life of Pi and Gandhi have resulted in Indians winning Oscars. But that too were conceptualized, produced and directed by Non-Indians.

Yes it is true that winning Oscar after a tough competition is a big deal. But being in the list of Oscar contending movies is equally important as it plays a pivotal role in winning the race. This year total 347 feature films have been officially declared eligible to contend for Best Picture. It’s the largest number of films in contention since 1970, when 374 films were ruled eligible.  Surprisingly six Indian movies also included in the list.  Dear Molly (English film Directed by Gajendra Ahire), Sound Story (Directed by Prasad Prabhakar), Kayamkulam Kochunni (Directed by Rosshan Andrews) Aickarakkonathe bhishaguaranmaar (Directed by Biju Majeed) ,Bhayanakam (Directed by Jayaraj) and Yadvi (Directed by Jyoti Singh)are the movies contenting for Best Picture from India. Besides  Sarpatatwam (the serpant wisdom) by Methil  Devika  is contended for documentary short category. 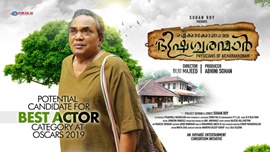 People, who worked behind Aickarakkonathe bhishaguaranmaar, can keep their heads held high and be very proud as it’s been selected to contend for nomination at 2019 Oscars. Besides the Best Picture category the movie is also eligible to contend for Other General categories including acting categories (lead and supporting roles), Direction, Production Design, Film Editing, Sound Design, Sound Mixing, Cinematography, Costume Design and Writing (Original and Adapted).

Aickarakkonathe bhishaguaranmaar, was a CSR movie directed by Biju Majeed and produced by Abhini Sohan Roy under the banner of Aries Telecasting Pvt Ltd. Initiated by Indywood Consortium, the project has been designed by Mr Sohan Roy and written by Shibu Raj. K. The cinematography of the movie, which features a total of 175 newcomers in prominent roles, was handled by P.C Lal. While B R Bijuram composed the music, the editing was done by Johnson Iringole.

The movie emphasizes on the 5,000 year old system of natural healing called ‘Ayurveda’ which is enjoying a major resurgence in both its native land and all over the world. Besides the theme, the movie utilized 100% of its revenue for flood relief and rehabilitation activities in Kerala, which witnessed one of the worst natural disasters in the history of the state recently, and for the support those in the film industry, who were affected by the floods.